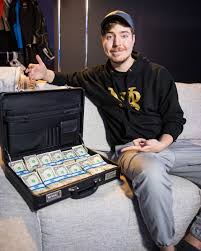 MrBeast’s latest giveaway has crowned a $1 million champion in one of the most unique challenges ever created by the YouTube creator known for gifting cold, hard cash. The highly-anticipated video titled, “Last to Take Their Hand Off $1,000,000 Keeps It”, appeared on MrBeast’s YouTube channel Dec. 19.

In case you don’t know who he is, MrBeast is one of the most popular YouTube creators in the world, with more than 27 million subscribers. The 21-year-old breakout star, one of the most viewed YouTubers in 2019, is famous for his videos featuring large cash presentations to unsuspecting recipients. MrBeast is the creative mind behind several viral videos, including “I Bought Everything In A Store” and “I Opened A Free Car Dealership”. He has successfully partnered with and represented leading brands in the mobile app, gaming and retail industries.

“I don’t care if it takes a day, week, month or a year,” MrBeast instructed the contestants. “The last one of you to remove your hand off this million dollars keeps it.”

The four finalists: Mark, Jorge, Omar and Akira (last names omitted for privacy), competed for 36 hours straight before one final hand remained on the money. And that hand belonged to Mark. They spent almost 2 days just standing with their hand on a box of money. They ate, slept, and just lived there, with their hands on the prize. In the end, Mark was so thrilled and he couldn’t believe that he just became a millionaire.

“Congratulations to Mark on winning my $1 million giveaway,” said MrBeast. “Each contestant earned his way to compete for the largest cash award I’ve ever given away. We had a lot of fun and created a lot of memories making this video. I hope my subscribers will help me make it one of the most-viewed videos yet.”