The United States produces around 37.83 million tons of waste a year. Americans are in the top five of the world’s leading trash generators. With fast food around every corner and relentless amounts of packaging in grocery stores, it is no wonder why things are this way. But what truly sets Americans apart from countries who are able to have a more sustainable way of living?

The first problem begins with the actual trash ‘system’ itself. After a trash truck picks up trash, it drives off and is never seen again. Just like that, the idea of all the dump produced by one household is vanished in minutes. In a different scenario, a person can produce little to no trash, but still have to pay the same amount as others who produce a lot. This confuses many because Americans are charged for the amount of water or the amount of electricity they use, but when it comes to the amount of trash produced, it all costs the same for every household.

On the other hand, countries, like Germany, have actually set a goal to have zero waste. In Germany, they now recycle about seventy percent of their waste and they burn the excess to use for energy. They have continued to encourage their citizens to have a greener way of living, while still finding solutions to the trash that still ends up being produced. 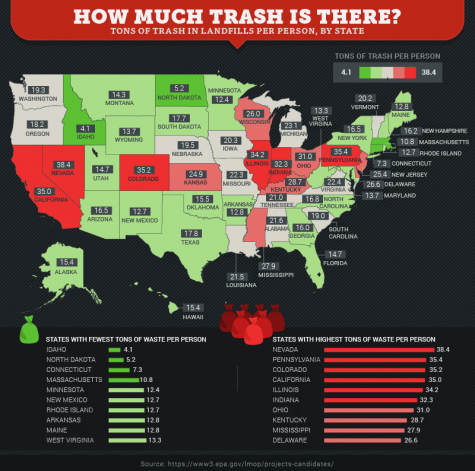 Taxing trash is still not the best solution though. While it may encourage recycling and a “greener” way of living, it may also encourage bad behavior. Americans that are unwilling to change their waste-producing patters and who do not want an extra tax on it may find other ways to discard of it, such as putting it in a neighbors trash or just leaving it on the street.

There is still hope for the United States to clean-up their act and recycle more. At the moment, America recycles only nine percent of their waste, so it can only get better from here. People can try to make composting and recycling more accessible than just tossing trash in a garbage bin. Another thing Americans can do is to ban or stop using single-use items. These methods have been shown to work in some places such as San Francisco, who has a “zero-waste program” in place.

The steps to reducing the waste in the United States takes a community, but it starts with you.