Once Upon a Time in Hollywood Spoiler Free Movie Review 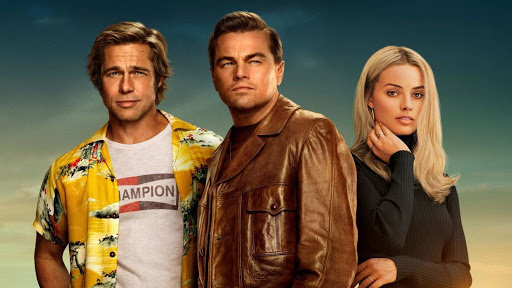 Nominated for 10 Oscars last season, Once Upon a Time… In Hollywood made a huge splash in the entertainment industry, especially among die-hard film lovers. The film, directed by the legendary Quintin Tarantino, is set in Los Angeles in 1969, the years of the infamous Manson Family Murders. The movie follows actor Rick Dalton (Leonardo DiCaprio), and his stuntman-slash-personal assistant Cliff Booth (Brad Pitt) as they navigate the changing film industry. The movie, inter-cut with numerous flashbacks and scenes from other in-universe fictional films, culminates in an ending in which they explore the “what if?” of real world events in this alternate universe.

The most talked about aspect of the film is it’s gorgeous portrayal of 1969 Los Angeles. To make the movie, Tarantino refused using CGI to turn back the time on modern Hollywood streets. Instead, the production team took over multiple blocks on Hollywood Boulevard, totally transforming the streets into something from 50 years ago. They even got the rare permission to film a scene in the actual Playboy mansion. The result is beautiful, and succeeds in totally immersing the viewer in the atmosphere of the film. However, the driving scenes (of which there are many), tend to drag a bit, especially considering the movie’s almost 3 hour run time.

The main thing about this movie is that it is a love letter to the 60’s, and that specific era in the entertainment industry. What the movie lacks in a solid plot, it makes up for in scenes from fictional movies and television shows. Intermittently, the viewer is teleported from 1969 Hollywood into a 1940’s war drama, or a vintage Western serial. These are the scenes from the movie that get the most attention from the film community, and are a testament to Tarantino’s love of film history and very well-executed references. However, outside of the realm of classic movie buffs, the numerous cut scenes have the potential to confuse and distract. Especially if you don’t understand the material that each fiction movie is referencing.

A personal favorite part of the movie was the absolutely spectacular acting. This film is stacked with the biggest names in Hollywood, and it lives up to the hype. DiCaprio is the particular standout, who delivers an absolute powerhouse of a performance. The audience not only gets to see him portray his character of Rick Dalton, we also get to see DiCaprio as Dalton appear in numerous other fictional films. This showcase of versatility highlights so many different parts of DiCaprio’s ability, it really is the perfect role for him.

Overall, this is the perfect movie if you are able to understand all of the references. It is extremely well-researched, and does an excellent job at portraying everything it set out to. It really depends on whether you are willing to trade it’s runtime and lack of plot for the near-perfect nostalgia it brings.