The Death of Sarah Everard 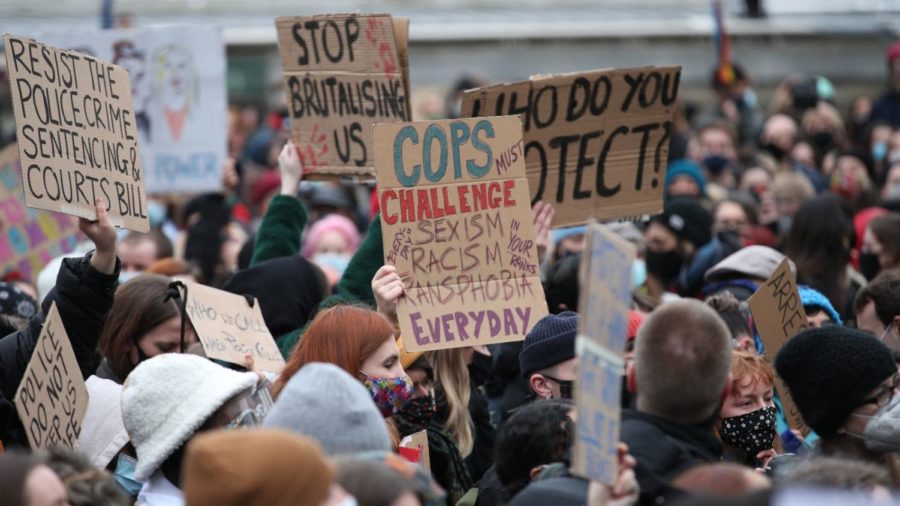 A protest against the police following the death of Sarah Everard.

Sarah Everard, 33, went missing on the evening of March 3, 2021, in South London after leaving a friend’s house near Clapham Common to walk home.

Everard left her friend’s house at 21:00 GMT and walked across the common, along the South Circular Road, on her way home. She spoke to her boyfriend on the phone for fifteen minutes and made the decision to meet up with him the next day. She was seen on doorbell camera footage at 21:28 on Poynders Road, and again four minutes later on the dashcam of a passing police car, as well as on the CCTV footage from a bus passing her route at 21:35. Everard’s boyfriend contacted the police the next day, when Everard failed to show up to their meeting.

Police searching Hoad’s Wood near Ashford, Kent, found human remains in a builder’s bag on March 10. On March 12, Everard’s body was identified through her dental records. Police continued to search the woodland in Kent and enlisted specialist divers to search underwater for Everard’s phone.

A Metropolitan police officer, 48-year-old Wayne Couzens, was arrested at his home on March 9 on suspicion of kidnapping. He was re-arrested the next day on suspicion of murder, when Everard’s remains were found.

Couzens was charged with Everard’s kidnapping and murder on March 12. He appeared at Westminster Magistrates’ Court on March 13 and was remanded in custody before appearing at the Old Bailey through video from Belmarsh Prison on March 16. Respectively, the plea hearing and provisional trial are set for July 9 and October 25.

Home Secretary Priti Patel made a statement on March 11, saying, “Every woman should feel safe to walk on our streets without fear of harassment or violence”. Patel announced that new laws are being considered to protect women from sexual harassment in public, including the possibility of making public harassment a specifically defined crime.

A message was sent to all police chiefs from Patel on March 12, instructing them to stop people from gathering at vigils that were put together to commemorate Everard. A vigil named “Reclaim These Streets” was planned for March 13 on Clapham Common and was cancelled after talks with the police. Similar events in Edinburgh and Cardiff were cancelled in favor of online events. The police made it clear that vigils would be considered illegal under COVID-19 pandemic restrictions. Vigils were still set up in numerous cities, including Birmingham, Bristol, Cardiff, Edinburgh, Leeds, Nottingham and Sheffield.

A vigil took place at Clapham Common on March 13 and drew a crowd of hundreds, all of whom were there to pay their respects to Everard. The Metropolitan Police broke up the crowd, forcibly arrested the attendees, and trampled over the flowers laid by them, all of which sparked public anger.

The police faced a lot of criticism for their response to the vigil. Dame Cressida Dick, the Metropolitan Police Commissioner, refused to resign when urged to by Sir Ed Davey, the leader of the Liberal Democrats. Assistant Commissioner Helen Ball defended the actions of the police, saying that “hundreds of people were packed tightly together, posing a very real risk of easily transmitting COVID-19”.

Over 1,000 people marched from New Scotland to Parliament Square in protest on March 14. They are urging for justice to be brought to Sarah Everard, and for the law to make the world a safer place for women in order to prevent there being another Sarah Everard. Women throughout the world took to social media to make their stance on the situation clear and share their own stories, empathizing with Everard and the UK. A new energy has been brought to women, and they are all advocating for change.

Who was Sarah Everard and what happened to her? (thesun.co.uk)