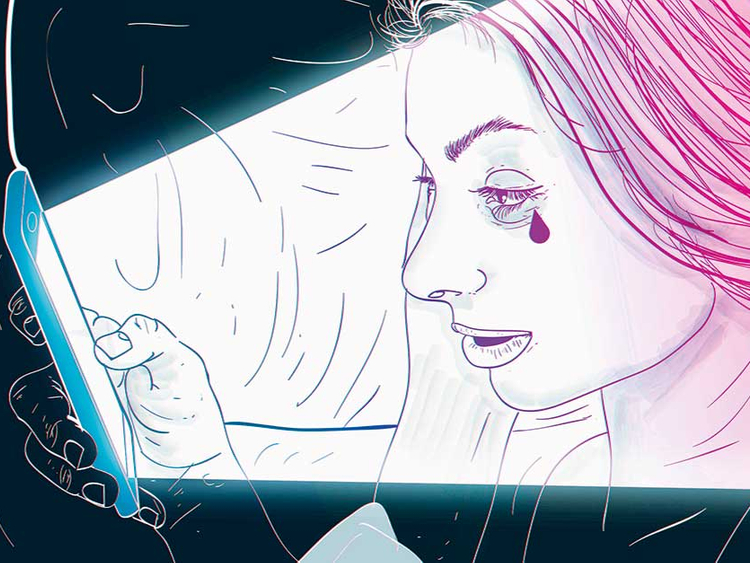 Social media websites are some of the most commonly used platforms today. Social media first began to grow in the early 2000’s and with that, so did the arguments. Both sides of the argument have valid points on which way they affect teens. Because of the strong opposing arguments, it can be hard to pick a side, but by looking at the statistics and facts you can assume that social media is extremely harmful, not only to mental health, but also physical health.

The common thing that’s seen across social media is influence. It’s seen with the challenges that were just mentioned. It’s obvious that social media can influence someone’s mental health, especially adolescents’. Teenagers who use social media are far more likely to suffer from anxiety and/or depression than those who don’t. The suicide rate for girls has elevated by 65 percent since social media became more popular. In 2017 a study came out and proved that teens who used social media had high levels of depressive symptoms that jumped 30 percent throughout 2010-2015. When hearing about that, the first common response is, “Well why don’t they just stop using it?” That’s the first issue. Social media is designed to be addicting and when a person sees all of their friends using it, they don’t want to be the odd one out. This is where FOMO, fear of missing out, plays in and makes it difficult to quit social media.

With the inability to quit social media, teens are dragged into more problems. One of them being how competitive it is. Whatever one person can do, another person can do better. Whether whatever they’re trying to do is healthy or not, some people will not hesitate to display that they can do it better than the original person. This can start unhealthy trends and challenges, such as the Tidepod challenge, devious licks, the ice cream challenge, or the cinnamon challenge. The Tidepod challenge and cinnamon challenge were very damaging to the bodies of the people attempting it and it caused many poison cases and death reports. The devious lick trend and the ice cream challenge were both acts of vandalism and the people doing it  were either fined or arrested. The reason most people participated in these trends was because of the influence from others. When teens see one person doing something that leads to receiving likes and followers on the internet, they want to do it too. Social media influences the crave for validation and can ruin the lives of people trying to get praise.

Adolescents are more vulnerable to being influenced. Their minds and self-identity are changing and social media can have a huge impact on that. A lot of teens want to feel validated, so it’s not hard for them to adopt whatever persona they see someone else getting praised for. It gives them less of a chance to become their own person and a greater chance to just squeeze whatever’s relevant into their brains. Whatever is being shown to most teens may have an influence on them and sometimes it can be healthy, but in most cases it can negatively impact who they become. Teenagers who are exposed to negative influences can be at risk for becoming less successful in life or not caring about their values. If teens are able to let themselves grow socially in the real world, then they’ll be less likely to be influenced by social media. It’s important to let teens build character by themselves instead of building the character they’re being told to by the internet.

Completely eliminating the use of social media for teens is unrealistic and almost impossible, but reducing the amount of time they use social media could work to help them focus on their real lives. Teens should still be able to use social media to receive some of the positive effects from it, but they should be careful about how much time they spend on it. It’s also really important that they carefully monitor how social media is affecting their mental state and pay attention to signs that indicate they should take a break.