The Strange Situation of Kyrie Irving 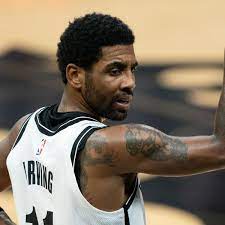 Who is Kyrie Irving and what is his beef with the NBA? Well, Kyrie Andrew Irving is an NBA All-Star for the Brooklyn Nets who has won many awards such as  Rookie of the Year in 2011. He played for the Cleveland Cavaliers until 2017, which was the year he moved to the Celtics. He ran into some trouble with the Celtics organization and then moved 217.5 miles south to Brooklyn and Mr. Irving has been playing for the Nets ever since.

As of lately however, he has been in the news lately for defying state law on Covid Vaccination. The state of New York requires athletes that play indoor sports to get vaccinated against Covid-19. But Mr. Irving does not want to get vaccinated. So what does this mean for Kyrie’s career?

Well, we’re going to have to guess that he will not take the vaccine. If he does so, he will not be able to play for the Nets nor practice with them, with that we can assume that his very lucrative contract, for both him and the Nets, would be terminated and he will spend an entire season not playing. He may be featured at next year’s NBA draft if he does not retire, which he has so far opted against.

“Kyrie Irving needs to pull it together, he needs to make up his mind. Is he gonna continue playing Basketball? Or is he gonna quit? He has exceptional talent, but wasting it on something that he has no voice in and will never be able to have a say in is terrible decision making.” That was one of Canyon High Schools biggest Nets fans (who wishes to remain anonymous).

Kyrie has shown that he wants to continue playing with the Nets. Then why not take the vaccine, you may ask? Well, we don’t know. He has only said that he wants to stand up for the rights of people who don’t want to get vaccinated, but at what cost to him? Well his contract right now is for a little more that $200 Million, as he had the possibility of extending his contract for 45 million from his already massive contract of $136.5 million contract and a salary extension for 16 million, from his previous 11 million. But from the comments he has made in Social Media, he’s aware of the stakes.