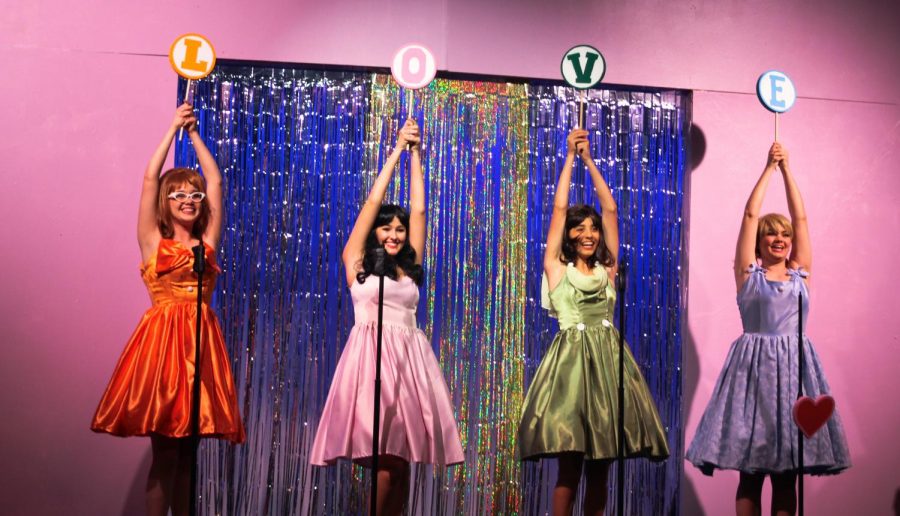 Following the Canyon High School fall play, Puffs, the RSE is back with the fall musical:The Marvelous Wonderettes! This play takes place in the 1950’s at a high school prom. The four leads, played by Ashley Kosonen, Isabella Feeney, Nikki Yarr, and Alexandra Vargas, are a vocal group performing at the senior prom in the show, and the premise of the production follows their struggle to find love and the hardships that they face within themselves in their relationships. In Act 2, the show transitions to the 1960’s at the Springfield High School 10 year reunion, where the Marvelous Wonderettes are performing again. They get the group back together, but they still face the same struggles they had during their high school days. There are troubles with their lovers, and there are bonds that are broken and amended between the girls. The show outlines the beautiful connection between best friends and the support that love can give a person.

The cast is made up of only four people, yet they still managed to put on a spectacular production. Their harmonies, choreography, acting, and stage presence was wonderful, and anyone watching the show can see how much work and time each of them put into making this show great. I loved the audience interactions and the fact that the prom attendees were meant to be the audience members themselves, which only added to the old-fashioned atmosphere that they were trying to create.

I asked the cast of the Marvelous Wonderettes what their experience with the show was like, and some things that they took away from their time working with each other. As this was her first show, Alexandra was “so grateful to have been a part of such an intimate and supportive cast and crew,” and she says that she met some of the “most beautifully talented and kind-hearted people”. Ashley mentioned that she “tremendously grew as a performer throughout the process” of this show, and was “forever grateful” to have had the “opportunity to work alongside incredibly talented cast members as [they] created this beautiful show” together. Nikki said that she was “so proud of every single person involved in this show” and wanted to thank “everyone that made this experience as beautiful as it was”. Reflecting on her experience, Isabella said that she “had such an amazing time working with such amazing directors and such talented girls” and wouldn’t have “traded it for the world.”

Overall, I really enjoyed the message of the show. Although the storyline involved the love lives of four teenage girls at their senior prom, it still conveyed the idea that life may be hard, but good people make it easier to handle. I think that the show did a great job of showcasing the lifelong connections that people can have with each other.