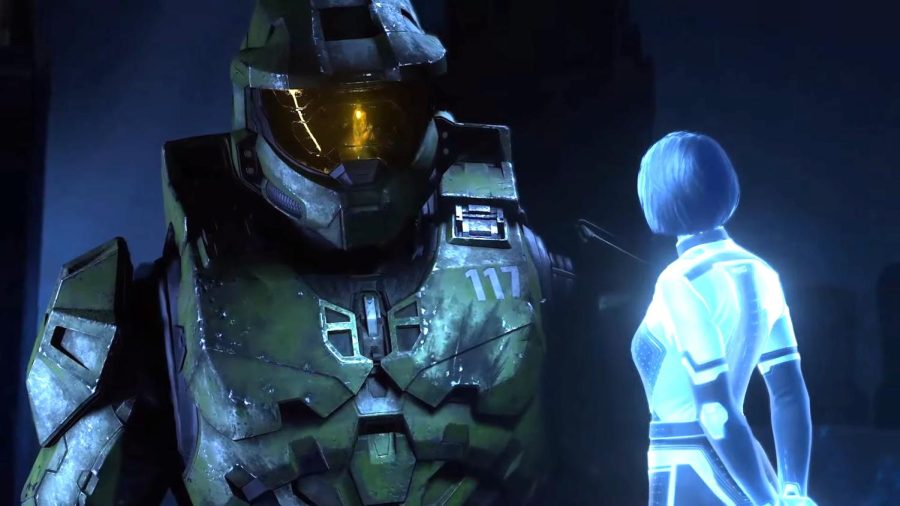 Halo Infinite is the sixth installment of the main Halo series, featuring Master Chief, Weapon, and Echo 216 as the main protagonists. Some fans did not hold high hopes for this game’s campaign, myself included among them, however after playing the game I stand corrected. I’d like to note that this article will contain IN-GAME SPOILERS for the single-player story of Halo Infinite.
The Campaign
The campaign begins with the Infinite, humanity’s biggest ship, being torn apart by the Banished. The Banished are a group of aliens led by Atriox, an alien hellbent on the destruction of humanity. The game opens with Master Chief getting thrown into space by Atriox as the pride of humanity’s fleet is destroyed. Months pass and Chief is picked up by a lone pilot named Echo 216, whose real name is later revealed to be Fernando Esparza, however I will refer to him as Echo 216 as this is how the player knows him throughout the majority of the game. Soon after Echo 216’s and Chief’s meeting, Chief boards a Banished ship then meets the new leader Esherum of the banished. In the time Chief has been out of action, the Banished have a new leader, how Atriox died or was removed is a mystery at this point. Master Chief then goes down to the new ring called Zeta Halo. From there Chief meets his new A.I. friend, Weapon. Weapon was initially deployed to the ring to kill Cortana, Master Chief’s previous A.I.  leading to Chief’s mistrust of Weapon and difficulty to open up to her, causing much tension in their relationship. Chief and Weapon go about liberating human soldiers and taking back the ring from the Banished who have taken control. Chief then encounters an alien named The Harbinger at an installation called “The Conservatory”, she allied herself with the Banished in order to free her people who have been trapped on the ring. With this, Chief and Weapon halted the ring’s repair sequence and the Harbinger tried to hack Weapon, causing Chief to try to delete her in the hopes deleting Weapon while she was hacked would kill the Harbinger. Weapon halted the deletion and repelled the Harbinger, angrily asking Chief why he doesn’t trust her. This prompted Chief and Weapon to have an argument about their relationship, but this is halted as Echo 216 is captured by the Banished, so Weapon puts aside her feelings and helps Chief save Echo 216. Chief and Weapon frantically rush to save their friend, they achieve this and in doing so kill Esherum. After Echo 216 drops off Chief and Weapon to kill the Harbinger, they do this to halt the reconstruction of the Ring.
Authors Opinions
This Halo’s story is significantly better than Halo 4 and 5 in my opinion. The story in Halo Infinite is intriguing and fairly easy to follow, something that Halo 4 and 5 lacked. Not only was the gameplay a step up from its predecessors, the relationship between Weapon and Chief was an amazing dynamic that I didn’t know the series needed. I initially thought Echo 216 would be just a shoo-in character to give Chief rides to and from objectives, but I was gladly proved wrong. His character arc is surprisingly intriguing for a side character and a welcome addition to the cast. Overall, this Halo’s campaign was an amazing campaign which managed to add onto the lack-luster campaign of the Halo before it.