Stephen Breyer To Step Down From The Supreme Court 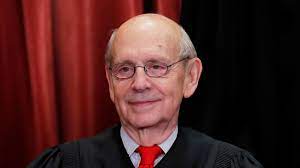 Justice Stephen Breyer, according to NBC, will be stepping down from the Supreme Court when his current term is concluded. This is big news, for it may be an opportunity for the Democratic Senate to flex its muscles after months of inaction thanks to the staunch opposition of Senators Kristen Sinema and Joe Manchin (of Arizona and West Virginia respectively). It will also serve as a chance for the Biden administration, which, due to disaster after disaster since the inauguration (and war with Russia over Ukraine on the horizon) is desperate to place some political accomplishments under its belt, especially as Build Back Better burns and collapses in on the Biden administration and the Democratic party as a whole.

Given the unpopularity of the Biden administration in recent months, the Democratic party will also be hard-pressed to maintain a Senate majority, further enticing Democrats to fill the vacancy on the court before the likely loss of their senate majority in November, which would allow Republicans to fill the vacancy on the court, embarrassing the Progressive legal movement that has mishandled and handed Conservatives a historic 6-3 majority. Potential candidates for the vacancy may include Merrick Garland, current head of the Department of Justice (and the man who called parents in Loudoun County terrorists), Ketanjii Brown Jackson, and Leonadra Kruger. The Biden Administration, as of January 27, is considering Ketanjii Brown Jackson, and Leonadra Kruger over Merrick Garland, as the Biden administration has made very clear its intent to nominate a Black Woman to the Supreme Court in order to fill its promise to make a historic race-based SCOTUS nomination that Biden made during his campaign. Whether or not the Biden administration is able to place its  candidate in the Supreme Court will in large part depend on previously mentioned Kristen Sinema and Joe Manchin deciding to vote with or against the Biden Administration, and what more Liberal, “Squish” Republicans will think of the new candidate.