Amadeus, A Brilliant, But Unfair Movie 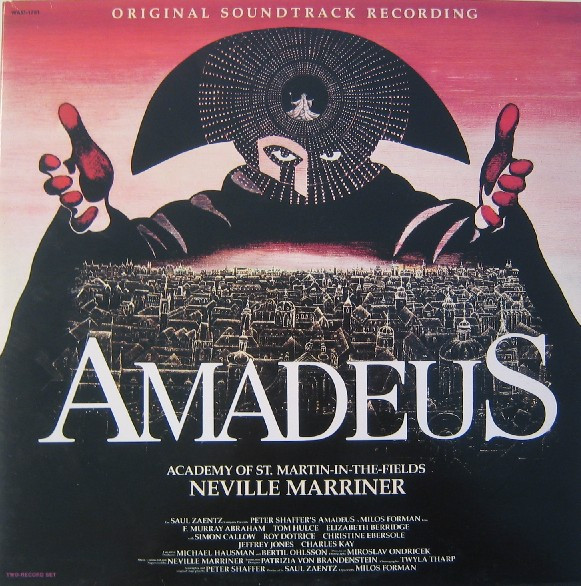 Amadeus is an American dramatization film that follows the stage play Amadeus, about the supposed rivalry between the Italian director and composer Antonio Salieri and the venerable Amadeus Wolfgang Mozart, who of course needs no introduction. It stars an incredible cast, including F. Murray Abraham as Antonio Salieri, Tom Hulce as Mozart, Elizabeth Berridge as Constanze Mozart, and Cynthia Nixon as Mozart’s “aid” and Salieri’s spy. The performances in this film are often widely considered to be some of the best in film history, with the movie being nominated for 11 academy awards, winning an Oscar for best picture. Murray Abraham, won an academy award for Best Actor, just barely taking the award over Tom Hulce, who was also nominated for Best Actor. The entire movie’s soundtrack is just Mozart’s work, which is not only perfect for the setting, but in and of itself likely the best works of music in history. In 2019, the film was nominated for preservation in the United States National Film Registry by the Library of Congress. Its performances, casting, unbelievable costume work, music, and filming locations (shot in Prague, with some of the performances in the movie being redone at the theaters where these performances were originally debuted centuries earlier) amounts to nothing less than the culmination of Western High art, and it has committed a great injustice on a man’s good name, this being that the film has given its depiction of the play of the same name.

The movie’s plot closely resembles the play of the same name, beginning with two of Salieri’s rapacious and self-serving servants bringing pastries to his studying room, only to discover an attempted suicide by Salieri after he drops a knife on his pianos’ keys while proclaiming guilt for his murder of Mozart. Salieri is then committed to what passes for a psychiatric hospital in 1823. Given that Salieri has retained the lion’s share of his sanity, he is given his room with a piano for him to keep himself busy. A Roman Catholic priest is then brought into Salieri’s room to hear his confession, thinking that Salieri has not murdered Mozart. Saleri then gives his confession, which is more or less his entire life story. Keynotes among his story are his rise to prominence in the courts of Austrian Emperor Franz Joseph, his first encounter with Mozart at the Archbishop’s palace in Vienna, his scheming with others on the emperor’s court to take down Mozart, Mozart’s childlike behavior, his rocky relationship with his father Leopold, his eventual financial and emotional decline, and his eventual downfall and death.

As stated earlier, the movie is almost perfect, but  I have one stipulation: none of it is true. The entire notion of the movie’s plot, that Salieri’s jealousy leads him to shun God, and murder Mozart in an attempt to steal his music, isn’t true. The movie makes a display of Salieri’s supposed infidelity and apostasy, literally burning a crucifix of Jesus on the cross, enticing Mozart’s wife for sexual favors in exchange for making a royal recommendation for government office for Mozart. At the end of the movie the priest giving his confession is too shocked to even say anything afterward. The movie is almost cruel in how it treats Saleri at the end, mockingly making Salieri proclaim himself as “The Patron Saint of Mediocrity”, and the movie ends with Salieri in a wheelchair absolving the priest, but all of his fellow patients in his psychiatric ward of their mediocrity.

My stipulation isn’t so much that I dislike that the story the movie is telling is untrue, as many great plays throughout history that have involved historical figures are in large part fictional, such as Shakespeare’s King Edward the Vth, or George Benard Shaw’s Caesar and Cleopatra, only two of many, many fictionalized apocryphal tales involving historical figures. My qualm with Amadeus is that it doesn’t make any attempt to inform the audience that the movie is based on a fictional play or that Salieri didn’t infact do almost anything he did in the movie. Truth be told, he had almost no relationship with Mozart beyond mutual respect, and mild rivalry. It’s almost hard to know that the two had ever known each other at all. The closest reality ever got to the events described in the film was when Mozart and his father Leopold exchanged a short series of letters accusing a “Cabal” of Italian composers led by Salieri of conspiring to keep Mozart from achieving important government offices, and a one time competition between the two composers, which Mozart was considered to have lost. Even the worst case scenario has their relationship just that of occasional competitive aquitaine, which irritated Mozart when his success was limited by the far more established Salieri. Everything else in the movie is entirely fictional, the poisoning, Saleri’s astounding apostasy, his vow to chastity (that he also breaks in the movie), and his delight over his fathers death. Almost all of it is false. Yet, given how succesful this movie is, the public, so far as it is aware of Salieri’s existence, will only be able to conjure up images of a jealous, bitter, apostate who murdered a fellow muscian, and tried to claim Requeim Mass in D minor (Mozart’s final piece of musical work, often seen as a funeral hymn he wrote for himself shortyl before his death) as his own work. To do this to a man, who is not widely known, and whose only crime was to be in competition with a musician that became much more famous than he did after his death, is beyond cruel.