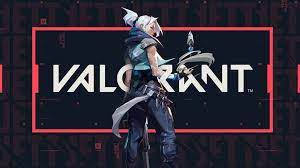 Valorant, produced by Riot Games, is a computer-only first-person shooter game. This game has gained popularity since its initial release in 2020, as about 13 million people play Valorant as of 2022. Valorant is a good recommendation for those who like Counter-Strike: Global Offensive, Overwatch, or just anyone who likes first-person shooter games. The game has three different features that you can look at while deciding if you want to give it a try or not: gameplay, competitive mode, and lore. 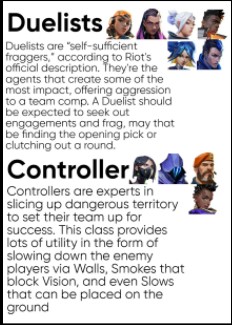 Gameplay
Valorant is a five versus five team game, you can choose to play with friends or random people. Once you get into a match you get a screen to choose an agent or character. There are a total of 18 agents that can be unlocked and five free agents to choose from once you start. What I personally like about this game is the diversity within the agents. The agents are of different races, and an accent can even be heard when agents like Astra, Phenix, and Reyna talk. Some of the agents like Chamber and Neon even have lines where they talk in their native language. Every agent has three abilities that are different from another agent. With these abilities, they are categorized into four types, Duelists, Controller, Initiator, and Sentinels. Based on these roles each agent has a role to follow on their team. Each agent also has their own personality and backstory. The game has five  different game modes you can play, Unrated, Competitive, Spike Rush, the Range, and Custom. Each gameplay has its own rules and is a different style. The basic gameplay that most players choose is Unrated. This is a 5v5 game that plays first to 13 points. Teams get a point by winning the round.  There are two teams, 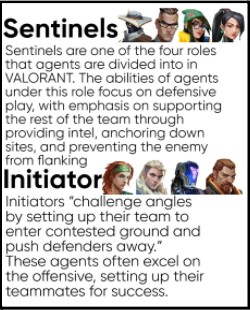 Attackers and Defenders. The goal for the Attackers is to plant the spike, or the bomb, and wipe out the other team. While the goal for the Defenders is to stop the Attackers from planting the spike and wipe them out. After 12 rounds the teams switch, so Attackers become Defenders and vice versa. Each round you can buy a weapon and abilities. The credits you get to buy items depend on how well you did in the last round.  If you won, how many kills you got, and how high your minimum for the next round is all contribute to your credits. The second game mode is Spike rush, a quick five versus five game that goes to the first team with four points. This game is similar to Unrated but you don’t have to buy anything in this game, as it is already provided. Another difference is that in Spike Rush, there are orbs that contain powers that could help you and your team or affect the other team. The Range is just a place where you can practice your aim, test out other agents, and practice planting the spike. A Custom game is a game where you play against your friends. The party leader can change different features of the game, but anyone can choose teams.


Competitive Mode
Valorant has a whole ranking system for those who want to play competitively. The ranks start from Iron, Bronze, Silver, Gold, Platinum, Diamond, and Immortal being the highest. There are different levels within the ranks, like Iron 1, Iron 2, Iron 3, Bronze 1, and so on. The issue with the way that they rank players is that Riot Games made it so players are ranked 3 ranks below what they are supposed to be so that they can climb the ranks easier. This is a big issue for players because if they are meant to be a higher rank then it’ll be easy wins for them and the teams they go  against will keep getting deranked. The way to get into higher ranks is by winning. Every time you win you increase your Rank Rating or RR, and every time you lose a match you lose RR. In order to play Competitive, players have to be in a team of one, two, three, and five. If players don’t have enough they will get placed with other players. Competitive has the same rules as Unrated, players just take Competitive more seriously. The other players that play are also something players have to look out for. There are a lot of competitive players that are rude and toxic, but they are usually in the higher ranks.
Lore
This game actually has a lot of hidden lore that can be seen in maps, voice lines, and banners. Within the game, there are some agents who have a bad history like Viper and Reyna or Kayo and Brimstone. There are also characters who are really good friends like Yuro and Phenix. You can hear some of the voice lines that hint at the lore when a game starts or right after a round. One is when Reyna says “For you, Hermanita” which refers to her sister, who has a big part in her past. Another hint is when Cypher says “You know, Viper, the name Sabine really fits you” and Viper replies with, “Never call me that again! If you do though it’s Doctor Sabine, get it right.” These lines hint at Vipers past and how she was a doctor. The lore may have an effect on whether someone can play because of how the lore is interactive with the game.

The play style, lore, and competitive system are all good factors on whether someone should start playing Valorant. It all depends on what the player finds the most interest in. Overall the game is very well made, and has a lot more content to bring to the table in the future.